Feet, what do I need you for when I have wings to fly? 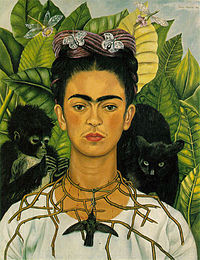 Who doesn't know her? Frida Kahlo.

Most of her paintings are self portraits.
"I paint self-portraits because I am so often alone, because I am the person I know best"


The pop trend depicts her as a brave, feisty victim/heroine, broken down by tragedy after tragedy.  Contracting polio at the age of 6, a fatal accident which led to a numerous surgeries, lifetime pain and complication, troubled marriage of 25 years to Diego Rivera, an renowned mural artist and a notorious womanizer. Diego was well known for being incapable of fidelity, having said,"It's just a fuck. I've given more affection in a handshake.", had numerous extramarital affairs, even with Frida's younger sister.
She is the epitome of tragedy, victim of fate and male oppression, yet remains strong and tries to live life to the fullest extent.

Being physically impaired and having numerous surgeries myself, I can relate to her very much. I love her fire, strength, optimism, and passion for life. But I would say she's a masochist, when it comes to heartache. She couldn't say no the the surgeries and pain, but she could've actually done something about Diego. But yet, as a supposedly strong woman, she begged for Diego's love, was promiscuous herself, went through some unnecessary surgeries to have his attention, and in the end was addicted to alcohol and drugs to suppress her physical and emotional pain.

"There have been two great accidents in my life. One was the trolley, and the other was Diego. Diego was by far the worst."

Dear Frida, I do admire you a lot, but Diego isn't an accident. It's your choice. You could've removed yourself from the situation, why did you choose to torture yourself? Love? 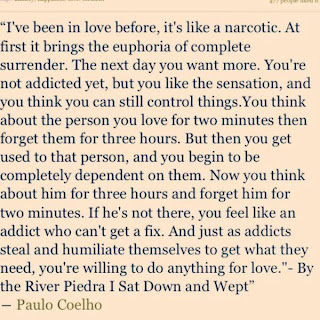 Ah well, it doesn't affect the fact that she's a great artist, anyway.
Out of all her paintings, I love this one the most, it resonates a lot to me.
"Arbol de la Esperanza, Mantente Firme" : "Tree of hope, remain strong." 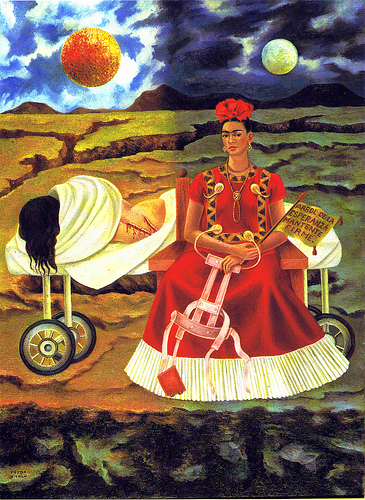 She painted this self portrait after a blotched surgery.
At day she was fragile, slumped on the surgery table with open wounds, but at the end of the day, there she was, sitting upright, proud and confident with her hands holding a spine corset she hoped to throw away and a flag saying "Tree of hope, remain strong." 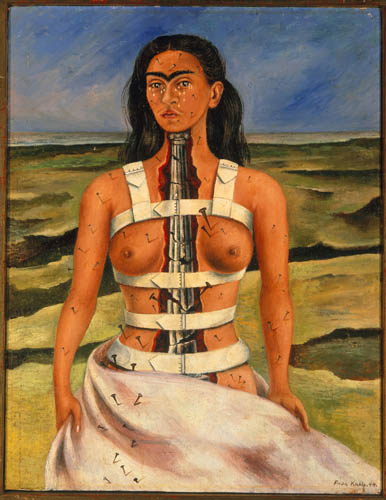 Pain, represented by nails piercing her entire body. The biggest nails represent the most severe pain, which is her heart.
Broken spine.
Tears
Head held high.
This is my favorite part: showing her sense of humor, she painted doves of peace in the pupils of the eyes.

When the art critics called her a surrealist, she answered,"I never painted dreams or nightmares. I painted my own reality."

And when her leg had to be amputated, she wrote in her diary:
"Feet, what do I need you for when I have wings to fly?"