Girls and our insecurities

It's hard to be a girl sometimes. We always have to deal with our insecurities about our appearances.
I've never heard a guy telling his guy friends,"Hey, don't dress up yea. Cos I'm not in my best shirt today."
Most of them just don't care about what their counterparts are wearing or how they look.
Whereas girls have the tendency to compete with their counterparts on who looks best.

I was supposed to meet up with some girlfriends a few weeks ago. I was still at home when they called me and said,"Hey, don't wear make up and don't dress up. We're not wearing make up and we look ugly."

They are not the first one who said that to me. My other girlfriends have told me the same thing too before.
This made me think, hey, I've never told my friends what to wear and what not to wear thankfully. No matter how ugly and dressed down I am, I dont really care what my friends are wearing.
I am very short and I can't wear high heels either. My friends are all taller than me and they love to wear high heels. But what do I care? It doesn't make any difference either, with or without high heels, they're all taller than me. Ok, maybe this is desperation talking hehe.

But sometimes I feel sad for my friends.. Don't they feel tired, comparing themselves to other girls? Striving to be the prettiest and the best dressed all the time?

Recently I was surprised how some pretty girls can be the most insecure ones.
I went to a pool party with a cute girlfriend. She asked me a few weeks ago to bring her a pair of bikini, and I did. I told her, let's jump to the pool. She refused and told me that she didn't want to wear her bikini. Why? Because she got a ugly bruise on her leg, as she just fell down the stairs a few days ago.

I told her,"It's ok. It's dark, and no one will notice anyway. I have surgery scars all over my body. If anyone notices your bruise, they will have noticed my scars first. I'll cover up for you, no worries."
Still she refused. And by the end of the party, she stayed dry and sulked in the corner.
Me? I was dancing the night away at the poolside in my bikini, surrounded by awesome people, having the time of our lives :)
Scars, bruises? Who cares? I don't. And apparently others don't either.

Isn't it a pity that a pretty girl could ruin her own fun worrying about small stuffs, being insecure and afraid of what other people would think, and forgetting the fact that she has a lot more to focus on than her bruise.
In the end, it is indeed a matter of how you see, accept and be comfortable in your own skin that counts. 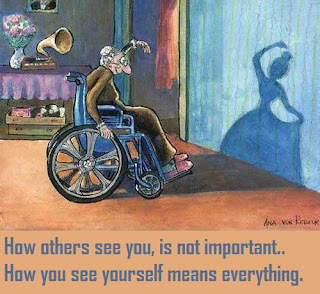