The Art of Happiness 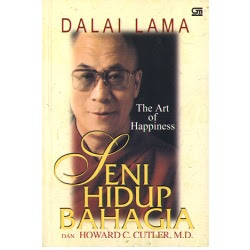 I have just recommended this book to a friend who had enough of religious dogmas (he was a moslem, fyi) and is looking for a more realistic/practical way to spirituality.
To be honest, I've read this book like ten years ago, having stolen the book from my parent's collection, but had completely forgotten what I read back then. Until recently, out of urgency of relieving myself and obsessive necessity of reading something, I just happened to grab this book.

This book is written by an american psychologist, who had the privilege of having discussions with H.H Dalai Lama. He questioned Dalai Lama's buddhist teaching with his western way of thinking, medical background, aggressive dualism, and selfishness.. to which I can relate so well. Regardless of my asian ethnicity, I grew up in a somewhat western environment. I went to a catholic school for 12 years, grew up reading western literature (from Enid Blyton to George Orwell), watching Disney channel and living in Germany for almost a decade did erode my being eastern.

What I like about the author, Howard Cutler, is his honesty about his frustration and confusion in dealing with the passive approach of Buddhism, how he finally realized how arrogant he was in hanging on to his direct psychoanalytical approach. I can see that he's not a spiritual guru. He's just.. me, a skeptical person who's brainwashed by the arrogance of modern education and religious dualism, questioning and looking for some answers in an unknown realm.. who in the end gained some enlightening insights to the concept of happiness, compassion and peace of mind. Not forgetting the Dalai Lama, I just love how he shows his tolerance and compassion, sharing his knowledge to non buddhist commoners like Dr. Cutler and me.