Dealing with anger and resentment

I won't lie.
Sometimes I do feel very angry at my mom. I resent her at those crazy times. I'm torn between the guilt of resenting my own mom and the love for her.
To give her the justice, I know very well that she loves me very much in her own way. She cooked me my favorite meals, she bought me expensive jewelery (though I don't like them), she wanted to give me everything money can buy. I know this is her own way of showing her love.

But sometimes when things are hard, I caught myself thinking,"Why do I always have to be the patient, responsible and the more mature one? How old is she, and how old am I, bitte schoen? Why do I have to parent my own parent? Why do I always have to neglect my feelings and focus on hers instead? Is it fair that I have to deal with my own physical pain (surgeries, scoliosis back pain etc), my own self esteem plus her insanity?"

But hey, it is what it is. She is who she is.
If I can't change things, then I have to change my way of thinking.
If I can't change her, then I guess I just have to be the change I wanted to see in her.
I  may feel that it is not fair, but I am not the center of the universe, aren't I? So, at some point, I have to stop focusing on my own pity party and start focusing on being a better person instead. And I won't stop the rain by complaining either.

Somehow I've learned that nothing lasts forever, that every emotion will pass, be it good or bad. Anger, hatred, resentment won't last, and I've learned the hard way that if I let those emotions get the best of me, the one who's going to suffer in the end is myself. The more you think about the anger, the more you replay those bad things people did, the more you'll hurt yourself.

The Zen guru, Thich Nhat Hanh said, if your house got burned down by a certain person, what are you going to do first? Trying to put the fire down or trying to catch the person who did it? A food for thought. I prefer the first choice :)

Another way to make it even more acceptable. I believe in the Karma concept, though I don't really believe in reincarnation. Maybe.. I owe my mom, the universe, whatever, a lot in the past (or the future), and my karma is now ripening. I know this sounds a bit contradictory to my statement of not believing in reincarnation, but hey, this makes me tick.. So bear with me, ok? :D It helps me put things in a more positive perspective.

I know some western-minded readers would think I'm crazy, a masochist. The me two years ago would think exactly the same way.. Some people would encourage me to dig deeper, release the anger, psychoanalyze. I've tried. And it didn't bring me the peace of mind I'm looking for. The more I dig and read about the borderline disorder, the more I analyze, the more hurtful it becomes, the more unfair it seems.
I have put my past hurts here in writing. And my way of moving forward is to let go. I do not want to write about borderline signs and tendencies anymore.. My mom will still drive me crazy in the future, but I refuse to look back, replay and analyze those things she did in the past anymore. I'll take the higher ground.
Holding on to the past is fun, I admit. It feeds my ego, justifies my right to be angry. But let see the after effect, what good does it bring me? Nothing.

I might be an idealist, but practicing mindfulness, awareness of my own emotions, letting go are more practical and useful than those skeleton-digging-psychoanalysis things. I'm not saying modern psychology doesn't work. Surely it does to many people, but it is just not my cup of tea. I'm a vintage girl who prefers to curl on a 2500-year-old-buddhist couch to an avant-garde Freudian one ;)

I have to say, I am where I am right now because of my dad and his very Yoda way of thinking :D He is the epitome of my accumulated good karma, I guess :) 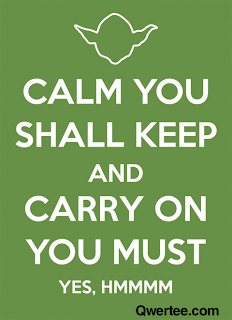 And to Yoda I'll say Amen.